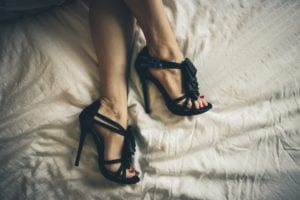 A woman from Otsego County in northern Michigan is accused of soliciting sex  on Craigslist. What makes her case distinctly different from the thousands of other people who do, and have done exactly that, is that she is said to be HIV positive. Worse yet, she allegedly failed to disclose it to her clients.

According to police records, 36-year-old Angelina Mendoza was arrested in April in a motel in Gaylord, MI. Sgt. Frank Claeys of the Gaylord City Police said that “Initially, (police) became aware of a female subject who had been having consensual sex with a male partner who was not aware of her HIV status. The subject was arrested on other charges and a thorough investigation was conducted. During that investigation, it was learned that she had been soliciting men online for purposes of sex for money.”

Police say that the man Mendoza was having sex with was surprised to discover that he had been potentially exposed to HIV and that Mendoza had not warned him about it. But what is of greater concern to health officials, is the 70 people who have responded to Mendoza’s Craigslist ad selling sexual services in exchange for money.

How many people may have been exposed to HIV through sexual contact with Mendoza?

Officials have stated that they have no idea how many of those men who made contact with Mendoza through the Craigslist ad actually met with her. For this reason, they have no idea how many people, if any, were unknowingly put at risk for contracting AIDS. The Otsego County Prosecutor’s office has gone on the record to say that they do not intend to prosecute any of the people who responded to Mendoza’s ad. That way, should any of them come forward, they can be called as witnesses in the case.

Michigan law states that a person who is HIV-positive, and has been made aware of that fact, is required by law to disclose their HIV status to any potential sex partners. Mendoza has been charged with a total of seventeen felony charges. She is facing seven counts of using a computer to commit a crime, six counts of sexual penetration without informing a partner of her STD condition, and four counts of prostitution, accosting and soliciting.

Although Mendoza is currently residing in the Huron County Correctional Facility on a conviction for unrelated charged, she was recently arraigned on these most recent charges. Her next court appearance, a probable cause conference, is scheduled for Thursday, July 28th. The preliminary hearing that follows has been scheduled for Thursday, August 4th, in the Otsego County Court in Gaylord, Michigan.

Prostitution is sometimes called a victimless crime. If these allegations against Mendoza are proven to be true, it will be nearly impossible to determine how many victims have been infected with HIV.

View all posts by John English →